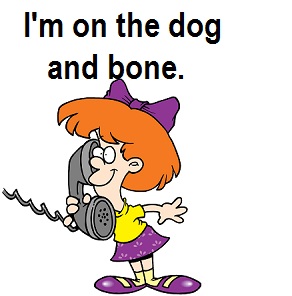 Rhyming slang is believed to have been first used in the 19th century in the East End of London. It involves replacing a common word with a phrase of two or more words. The last word in the phrase rhymes with the original word. Often the words in the phrase have an additional association with the original word. For example, the rhyming slang for ‘gravy’ is ‘army and navy’. ‘Gravy’ rhymes with ‘navy’ and large amounts of gravy were often served to personnel in the army and navy.

Sometimes, the last word from the phrase (the rhyming word) is omitted. For example, the rhyming slang for ‘head’ is ‘loaf of bread’. This is then shortened to ‘loaf’. Use your loaf=Use your head. This type of usage makes the meaning of the slang particularly difficult to interpret for listeners who are not familiar with rhyming slang.

Some sources suggest rhyming slang was created by criminals to prevent police officers discovering their plans. Although rhyming slang doesn’t appear to be so commonly used nowadays, it does provide an interesting jumping off point for phonological awareness and rhyming activities.

There are lots of resources available on the internet, but a few are listed in the reference list.

 Do an activity matching words with the correct rhyming slang.
 Discuss how the slang relates to the original words.
 Use the rhyming slang in sentences. 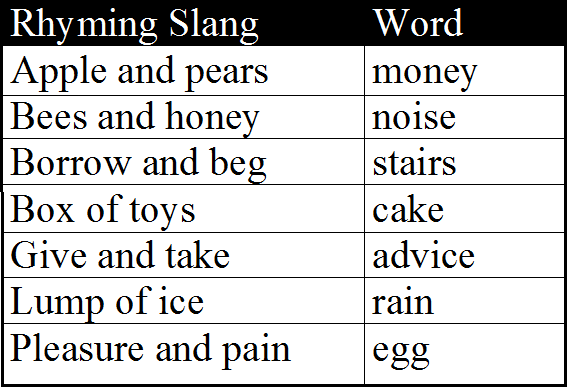 • Lastly, student could develop their own rhyming slang.