By Lillian on September 20, 2019 in Questions & Comments, Spelling 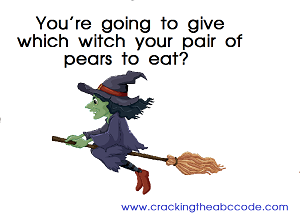 The word ‘homophone’ comes from the Greek words ‘homo’ meaning same and ‘phone’ meaning sound.  Thus homophones are words that sound the same but are spelled differently and have different meanings. Homophones have arisen because of changes to pronunciation over time (for example ‘meat’ was originally pronounces as /met/ and ‘meet’ was pronounced as /meeet/) and because English has arisen from the intermingling of several languages (‘peek’ compared to the French ‘pique’).

There are over 7700 homophones in the English language and many puns, jokes and cartoons are based on homophones. However, whether two or more words are homophones can differ according to a person’s accent.

It’s important that children learn to distinguish between homophones when writing and reading.

Link the homophones to a key picture using the same graphemes.

Use a substitute word to help with determining the correct homophone.

If you teach children the morphology and etymology associated with words, it will help them remember the correct spelling and to choose the correct homophone.

Two is associated with twin, twelve, twenty. You should be able to substitute another number for two in your sentence and it will still make sense. I had two pens. I had three pens.

Too is used to indicate an excess (too much) or in addition (like also). The ‘oo’ is a much longer sound than in ‘to’.

To is used in front of verbs (to swim) or as a preposition (I went to school).

The ‘k’ in words such as knit, knot and knight used to be pronounced. Saying these words with the ‘k’ pronounced will help children remember to add in the ‘k’ when spelling the word as well as help distinguish it from its homophone.

The k-night went out at night.

I will not undo this k-not.

Consider the words your children are learning to spell or read. If the words have a homophone, introduce these words at the same time, comparing and contrasting the meaning and helping the children devise strategies for remembering the words.