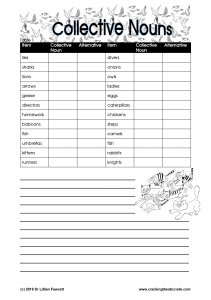 A noun is a naming word. It is something that you can see, touch, hear or think about (which is an abstract noun like love). A collective noun is the name given to a group of nouns (e.g., as group of students is a class, a group of birds is a flock).

Have your students complete the first table on the attached worksheet as they watch the collective nouns videos. Click on the image of the worksheet to open up a pdf version that you can print.

Have your students do an internet search to complete the second, third and fourth tables on the worksheet. In the second section of table 4, students can think of their own humorous collective nouns.

Sometimes using the ‘wrong’ collective noun for a particular group of items can be an effective and interesting literacy device for developing an image of a situation. For example, a ‘swarm of students’ raced into the playground (rather than a class of students) conjures the image of a frenzy of students escaping from the classroom at the end of the day.