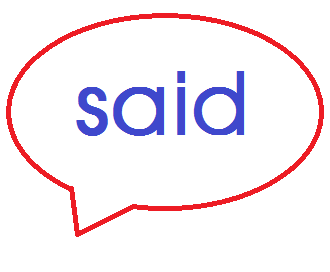 We often talk about ‘said’ as being an irregular word. However, when you look at the history behind this word, its spelling becomes somewhat more logical.

First you need to know a spelling rule.

cry-crying (‘y’ does not change because you are adding ‘ing’).

Three common exceptions to this rule:

It is not uncommon in English for past tense to be indicated by changing the vowel sound rather than adding on ‘ed’ (e.g., ride-rode, bleed-bled).

Now, think about the pronunciation of ‘laid’ and ‘paid’. Logically ‘said’ should be pronounced in the same way /sayd/. In fact, this is how we used to pronounce ‘said’ (and a few people in Scotland and other places around the word still use this pronunciation). However, over time the pronunciation has gradually changed to /sed/. Similarly, increasingly we are hearing the ‘ai’ pronounced as /e/ in other words – for example ‘against’.

Dig a little deeper and you will find that ‘said‘ is connected to the archaic word ‘saith‘, pronounced /seth/, which was replaced with  ‘says’ in the 13th century. Both ‘say‘ and ‘said‘ are also derived from the same Old English root ‘secgan’  meaning to utter, inform, speak, tell, relate. Interestingly, ‘lay’ comes from the Old English word ‘lecgan‘, but ‘pay‘ comes from the old French word ‘paier‘.

Think about how you pronounce the following words:

Another common exception to the ‘y’ rule is ‘daily’ which comes from the base word of ‘day’ and according to the rule should really be spelled as ‘dayly’ because the ‘y’ is following a vowel.